As mentioned in previous post, I started clearing out my craft room. Here's the reason why! 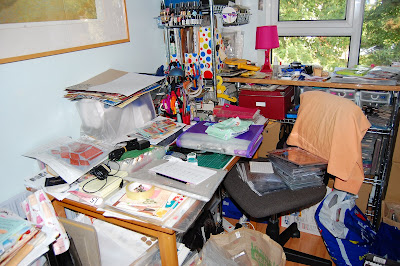 My crafting table, a right mess! 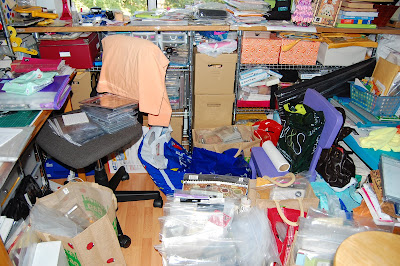 The area behind my crafting table.... see what I mean.. no floor space! 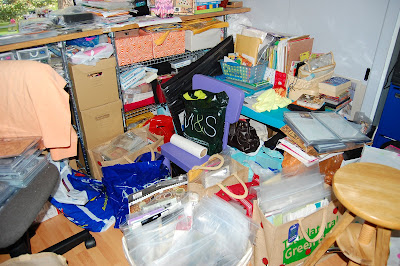 Further into the room ... a total disaster zone! 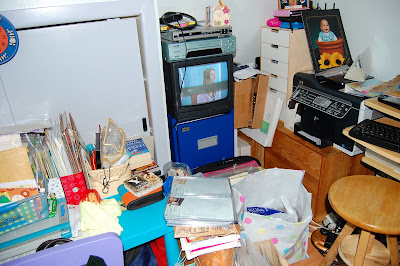 Where the TV and PC is, another dumping ground for pizza boxes! 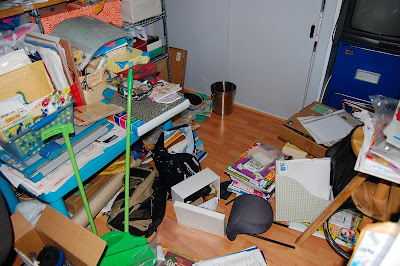 Preparing the space to delve into the cupboard. Can't say it's spacious but with proper re-organisation, I can easily fit my scrapping items inside!
Let's see the end results after my major clearout and re-organisation. I need to re-sort properly so that stuff that I use is within reach and easy access. There's so many embellishment that aren't being used due to the fact that they are hidden! So many alphas that aren't used as they are not within reach! Last but not least, making sure I use up the old stuff as they are still usable. Watch this space!!! TTFN!

It was a fabulous day today. Hubs had an idea to get a caravan so we headed off to check them out. Found a particular style that we like but will give it some time to mule over. As the hubs has been very busy with work these days, I'm not sure if there's time to even use the caravan if we did decide to get one! There's talk of him heading for the Middle East for a project which I'm not too keen on!
After that, we went to Strafford Upon Avon for a walk. Headed towards the river where we took a boat ride and enjoyed the breeze and the scenery. Kids had a great time running about. Wish we had more such days instead of the dismal, gloomy, overcast skies that is prevalent here. I leave with some photos of the day, taken by my Nikon compact. If I had known I was going to Strafford, would have brough my DSLR! 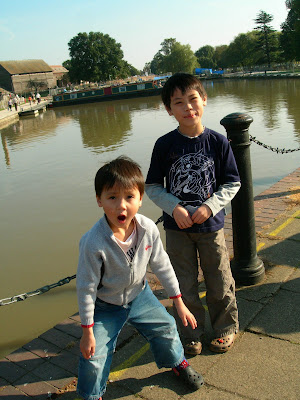 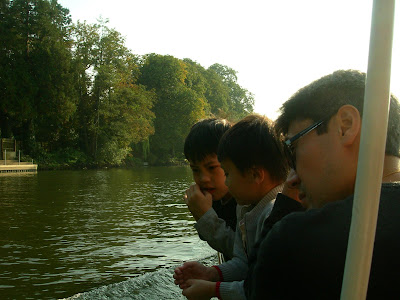 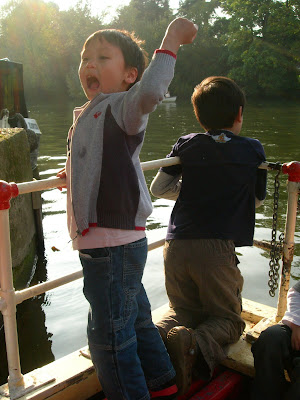 The little ferry that took us across the river. 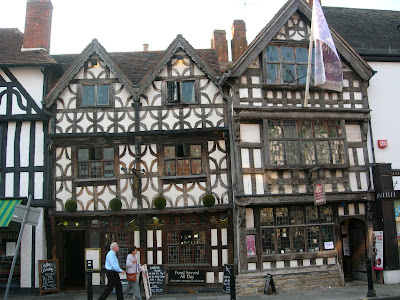 That is what I like about Strafford... the quaint little cottages that have been used for retail purposes. Makes shopping more enjoyable.
Finally, found this site which allowed you to design your words. Just add whatever words you want, and viola, it comes up like this!

You can adjust further but I like it this way!

Alright, so it was time to service the boiler and hubs arranged for someone to come today. I gave him a cut off time of 11.30am as I have to be at work by 12pm. Guess what, the darn chap turned up at 11.30am on the dot! So I asked nicely how long it would take to service the boiler, to which he replied half an hour at most. Yeah right! Instead of half an hour, it took a good hour and a half and to add insult to injury, he screwed the boiler up big time. Before his arrival, it was in fine working condition. After it had been through his hands, there was no heating and no hot water. What was worst was that when he realised he messed up big time, he did a runner and left! Gave the excuse there was no more he could do and we had to sort it out with the office! At time point, I went mad and told him off. How on earth can someone just leave after blotching up a service job and then turn around and say it's not his fault! At one stage, there was an issue about fixing a new 'knob' but due to insurance issues, that couldn't be done. I even overheard him on the phone telling someone it was his job to sort it out as he was done and could do no more!

Hubs was on to the office immediately and in the end, the company (incidentally called Vokera) passed him onto another company to do an emergency call out which we had to pay. So not only we had to pay for the service of the boiler but cough out extra dosh for an emergency call out. This nice chap came at quarter to nine, took one look at the boiler, turn on a valve and viola, the heating and hot water came on! He told us that the useless chap had forgotten to turn the valve back on and there is absolutely no problem with the boiler. In fact there wasn't even a need to change any 'knob'! We later learnt he had been on call outs to jobs that was done by the Vokera engineers (one wonders if it's the same guy that is screwing up all the boilers that he has been servicing?) He did admit that the service we received was far from satisfactory!

Anyway, I've been on the relevant bodies to make a complaint! I'm not gonna allow a cowboy engineer to ruin people's life. At this moment, the weather is so unpredictable and not to have heating nor hot water during cold periods is just not right! My whole day was ruined and I was so worried for my boys. I was just not myself today! What peeved me most was the fact that he walked out, literally, and left a boiler in an unworkable situation! That is one of the worst customer service ever encountered! Bloody coward! He is definitely not getting away with that and I'll do my utmost to ensure he gets proper training before he goes around fiddling with someone's boiler! One wonders if he's even Corgi registered!

Thankfully, we now have heating and hot water. Speaking of which, I just need to a good hot shower now! TTFN! 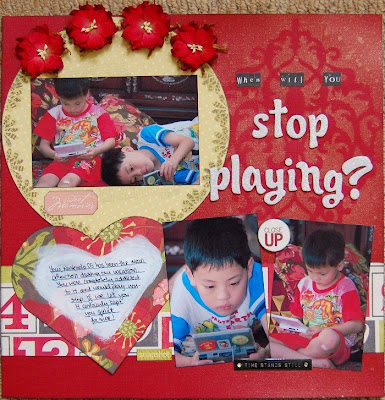 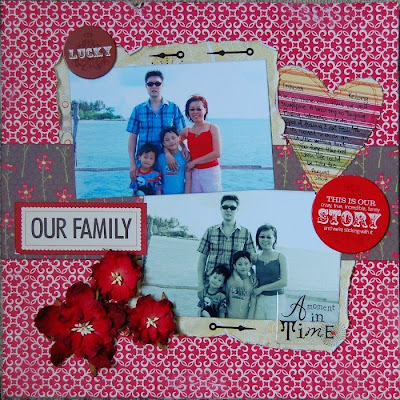 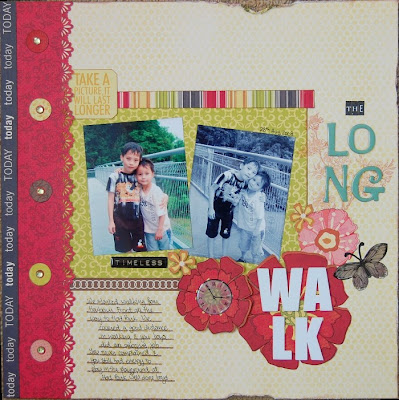 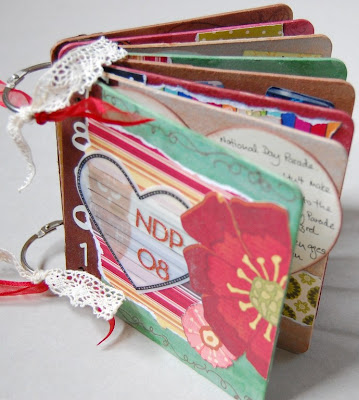 For my project, I did a mini album and played with Twinkling H20s. I painted the base of the pages with them as I was running out of papers! Those SR papers were just so delish to use. Anyway, a close up of the album below: 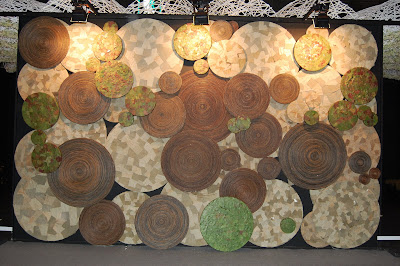 It was my turn to set a challenge and I came up with this Wall of Inspiration. While in Singapore, I visited a Garden exhibition and took a photo of this wall. Thought it would make a great scrapbook inspiration. Anyway, it did and here's my LO below based on this 'wall of inspiration': 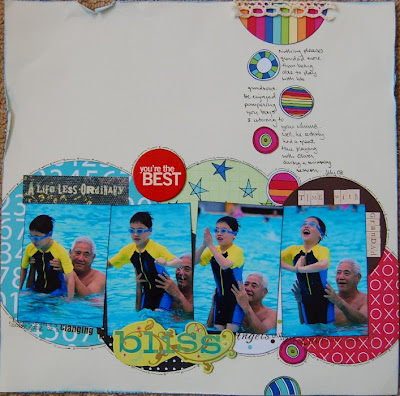 Played with the circular features on the wall.

While browsing on the Scrapbook Inspiration blog, I saw the recent issue and was shocked to find my LO on the front cover! Sheesh, that surely made my day! 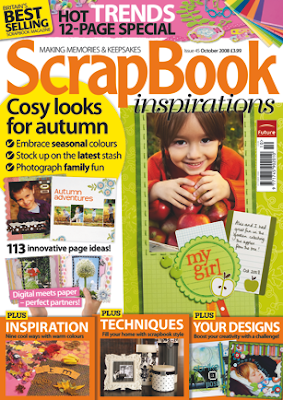 So which is it???
The LO was done as a challenge to scrap someone else's photo and I had no problem doing it. The photo I used was simply delightful and it was such an easy LO to do! Just hope my swappee likes it! She's a well-know British scrapper too. Sincerely hope I did justice to her photo!

Will be showcasing my LOs done with Homegrown Summer Survival kit. It's currently on my laptop and I need to transfer the images over to the desktop! Hate to say it but I still have luggage to unpack from my trip to Singapore... now that is embarrassing but as I'm the only one doing it, I shall take my time and crafting take priority over unpacking luggage! :)

I've been slacking but if truth needs to be told, it has taken me a while to settle down since returning from Singapore. Homesickness hit me and I even didn't want to scrapbook! Anyway, once day I walked into my messy craft room, took a look and decided enough is enough! So I started re-organising instead. First on the list was my stamps! I had accumulated loads over the years and it was time to sort them out according to categories as I felt it was the best way. So now I've got a few ziplock bags of stamps nicely separated. I'll be putting them on a laminated card and then they will be filed in folders.

Next, I tackled my scrapbooking embellishments. I separated all the papers and bellies from past kits and they were put into separate categories such as stickers, rubons, chipboards, blossoms etc. Half used papers went into one 12x12 baggie while full sheet went into another. So now I've got a basket full of ziplock bags with SB items all neatly organised! These will be put away respectively in their boxes as soon as my craft room has been re-organised.

Talking of which, I decided on a major re-organisation of my room. Stuff were spilling onto the floor and I couldn't take it anymore. So it was time for a spring clean! There is a cupboard filled with junk of a few years and I decided to clear it so that I could use it for my SB items. Threw out loads including pregnancy magazines, Teletubbies magazines and even school letters from my son's school from 2005 (why on earth I kept them I've no idea!!!) Anyway, the cupboard is now cleared and I've managed to put my scrapbooking tools in there. I've cleared some space on my shelves so that the newly sorted SB items will find a place in there! I'm now looking forward to sorting my stamps properly so that I will know what I've got and will therfore use them!

Sorting out my stuff has given my mojo back as I went for a crop on Sunday and nearly completed an acrylic album. Had fun doing it and about time too as it's meant for a DT project. I can't wait to get my craft room properly organised as I'm now bursting with ideas and just want to create! TTFN!

After 6 glorious week in Singapore, we are back unfortunately! If I had it my way, I would dearly have loved to remain behind and start afresh in Singapore. But it's not to be... well, who knows, maybe in the future perhaps! I simply can't remain in the UK forever... god forbid! I know I will be missing the food and fruits tremendously. No where can I find such an array of delicious dishes but most of all I'm gonna miss my duku! 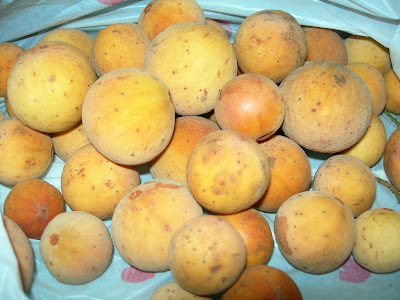 Man, this is making me hungry and if only my dad could send them over! Just my luck to live in a country with the most boring fruits ever!!!! Sigh!

It came into season on the last week and I was buying 2kg worth of them everyday to eat! It wouldn't be so bad if I could find half the food here in the UK, it would have made staying here more acceptable but nooooo, I can't barely get a quarter of it here so that's what make staying in the UK a nitemare! The weather is another grouse but that's another story altogether!
I leave with photos of the last day in Singapore! Miss my dad dearly! 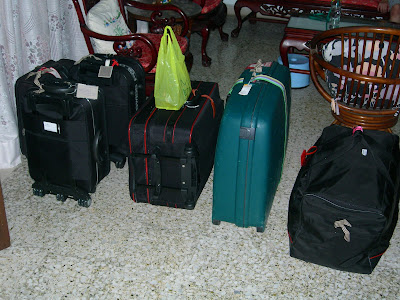 Our return luggage! 6 bags in all and all packed by moi! One bag consisted of entirely scrapping stuff. Hey, I'm entitled since I did all the packing. 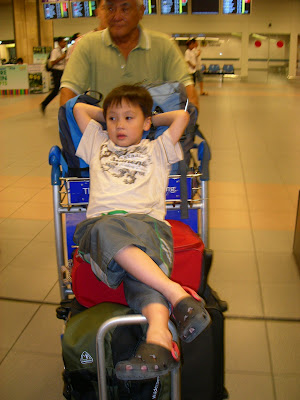 Little Zac just simply relaxing. He does get away doing such things since he's quite light! 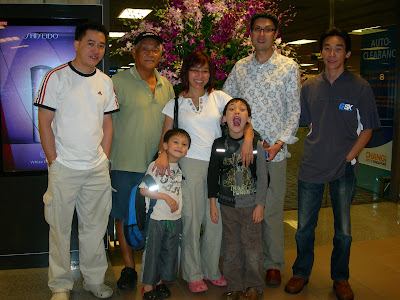 One last pose before going into the departure lounge. 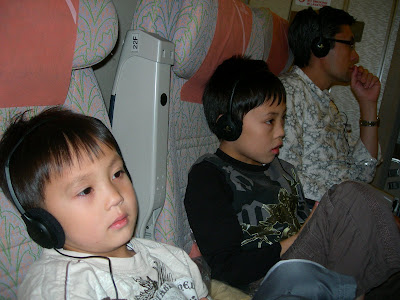 Inflight entertainment at their fingertips! That's what I luv about Emirates! I discovered they had my favourite Mahjong game and was playing that throughout!