Due to the strike, the boys were off school but not me! So I went in the morning to do my time and conducted a general meeting with my team. It was a productive meeting as we raise several issues and clarified procedures. The boys had private violin lessons in the afternoon as their exams are drawing near and I'm getting nervous!
Lots of activities happening in the next few weeks. Can't believe how time has flown and there is only 3 weeks left to the school term. 3 weeks left for my eldest in the Junior School as he starts Secondary School in Sept. Gosh! Told my wee one to spend the next 3 weeks with his brother as it's the last time they both will be in the same school.
It's the eldest's birthday in 2 weeks time. He initially wanted a sleepover with his friends but we (hubs & moi) are not keen and suggested a family outing instead. So we'll be heading for a theme park instead. I just can't cope with boisterous, hormonal-raging boys even for a few hours! Gosh, my boys are noisy enough without several more adding to the picture!
The warm weather has enabled hubs to do a lot of DIY. He put in a new bath and fixed a leaky flat roof. We had a fair number of quotes for it but they were such a ridiculous amount that he decided to do it himself with the aid of You Tube. He certainly did a great job!
I'm off to a carboot this Sunday. Got a fair amount of stuff to get rid off, namely toys, clothes & stash! I've lost my desire to paper scrap and see no point in hanging on to the monstrous amount of stash that has been accumulated over the years! Sheesh, did I really buy that much?
On the organisation front, got my boys' uniform bought, thanx to MIL. She got them from M&S where there's a 20% discount off uniforms at the moment. Plus as a previous employer, she get another 20% off so talk about a saving! I've only the PE kit to get for the eldest. I'm getting them out of the way as I'm away during the entire summer hols so I don't have any time to buy them if I don't do it now! Even their shoes have been bought but only because they worn them out. Let's hope they don't have a sudden growth spurt!
It's definitely gonna be a busy 3 weeks ahead. There's PTA & Governors meetings to attend, violin concert as well as Leavers' Performance/Award Ceremony. Not to mention a lot of little events in between. So looking forward to the summer hols! TTFN!
Posted by ♥ Audrey ♥ at 23:37 No comments:

Today's challenge is Beautiful Blue Ribbon. More like a rosette to me really. Anyway, it needn't be blue so here's my version of it: 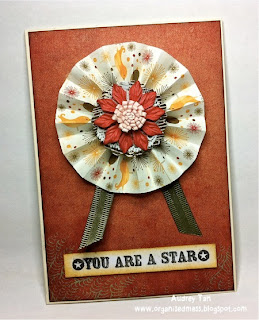 The day started brilliantly! It was warm and sunny. Actually it was very warm and humid. And this was the temperature I captured on my car at that particular time: 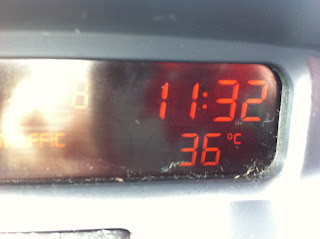 Seriously, I couldn't believe it! No wonder I was perspiring! But it didn't last long. It drizzled a little in the afternoon. Why can't it just stay hot?!!
On the creative front, I'm almost done with my Summer Vacation 2010 album. I'm ecstatic as all these years, I have always wanted to do a summer vacation album but never got it done. The closest I got was to decorate the album and that was it! But since going digi, it has been far easier to create pages and finally, my pages for the album is done. Now all that is left is to decorate the front cover and then I can sent them off to be printed into a Photobook. Not sure how it's gonna turn out as it will be my first time publishing it. Anyway, here are the last few pages... 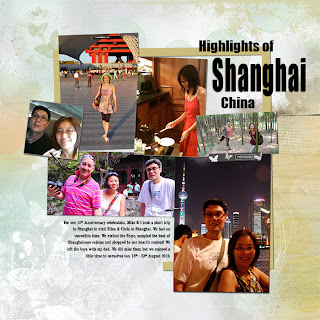 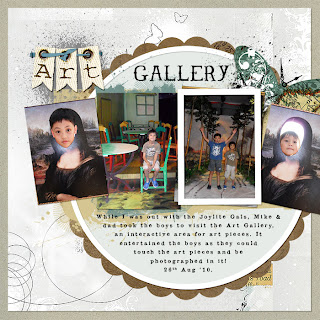 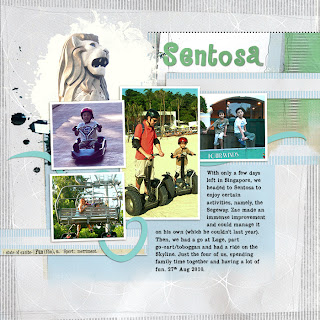 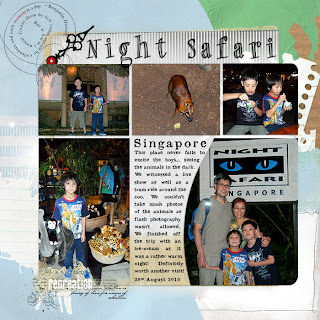 I have deliberately kept these pages simple, i.e. not much embellishments as I'm not sure how it would look on a printed page especially in a book! Besides, I was racing against time so I needed them simple! I was lucky to get a Groupon deal on a Photobook hence that is why these pages will be printed. Off to edit them now. There are a couple of LOs whose colours need changing! TTFN!

Ok so I've been busy and have neglected my blog. There's so much things happening at the moment, especially this month! Let's see if I can show them instead!
First week of June... half term and we were down in West Dorset at West Bay. Booked a caravan for 4 days. Boys enjoyed themselves. They went crabbing and loved it! We spent time with our hub's sis and her family too. 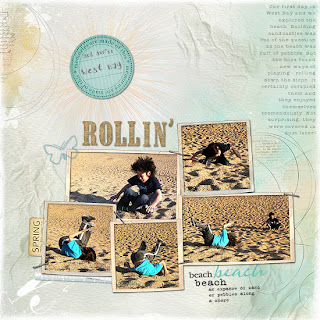 The boys rolling down the pebbled beach at West Bay. 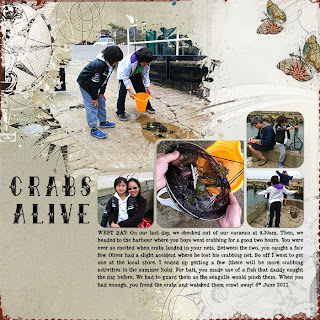 Here they are crabbing to their heart's content!
The second week of June, we entertained some friends from Singapore. They were here for the weekend and we brought them to Cadbury World, which never fails to amaze any foreign guests! I managed to find a 20% discount coupon online which we used to buy the tickets! Gotta luv the internet! 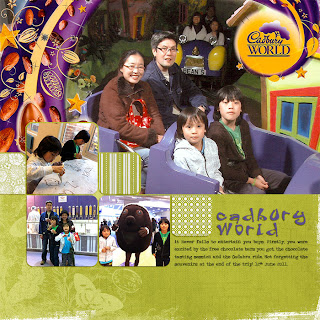 A LO to document our trip to Cadbury World. For once, we were all looking at the camera on the Cadabra ride. I look fat (who wouldn't with a jumper under a coat!) but it was a particular cold day that day.... it literally rained all day! Darn weather!
The 3rd week of June was another busy week as we (hubs & moi) attended Parents' Evening in the new school of Oliver. We were pleased with what we saw and we got uniforms for him too. Then Oliver was off to camp that weekend!
The 4th week saw my youngest receiving Star of the Week cert. I had a text to attend his Assembly. (A LO will be coming soon!) Then, I had guests from Singapore again, who stayed over for a nite. We brought them around B'ham Town Centre and had dinner at Jimmy Spices! Finally, I received news that Oliver made it to the Birmingham Youth Orchestra. He had to audition for it and he got in! So chuffed for him and well deserved too! What that means... a 3 hr practise every Sat from 9am - 12pm from Sep onwards! Never mind that he will also be joining the School Band in his new school too.
It's the Summer Fayre at my boys' school tomorrow and I'm helping out. Fingers crossed for a sunny day! What does next week brings? Another Assembly attendance for the older boy and Sports Day! Sheesh! Who ever said the role of a mommy was a relaxing one!!! TTFN!
Posted by ♥ Audrey ♥ at 19:18 No comments:

Today's challenge is Tuesday Trio. The card has to include floss, bead and stamped image. Here's my card: 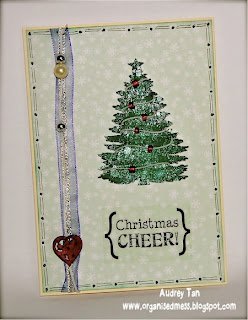 Stamped image from Banana Frog's Winter Wonderland. The tree has been decorated with beads & floss.
TTFN!
Posted by ♥ Audrey ♥ at 09:20 No comments:

Today's challenge is based on this movie's inspiration: 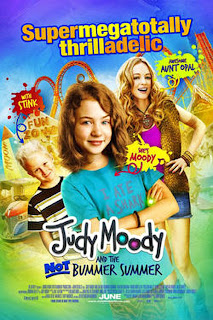 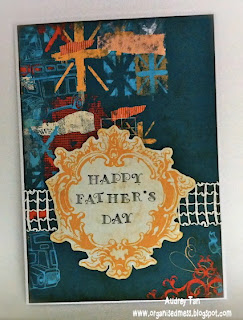 I focused on the blues! Card created using Katie Pertiet's Double Decker kit.
TTFN!
Posted by ♥ Audrey ♥ at 09:37 No comments:

Today's challenge is to create a birthday card with a birthday theme sentiment! Here's my card: 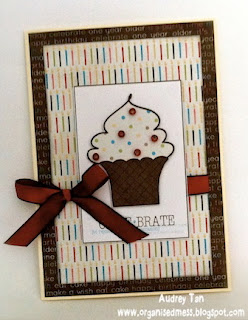